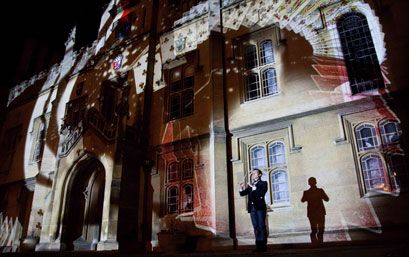 People know cinema. They know theatre. They know magic. But until now, no one has ever before merged these captivating elements into a new kind of show: the Magic Light Projection. It breaks down artistic barriers, and creates a powerful synergy between the various art forms.

Our Guinness World Record-breaking team create and customise large-scale spectacles that combine magic with light-projected animations. These projected shows are inspired by the facades that temporarily become the screens for these creations. Frequent themes include stories about the history of the building or surrounding area, which are brought to life in a variety of styles and in unexpected, imaginative ways.

The theatrical and magical component is courtesy of Alexis Arts - our unique and eclectic performance artist. With his background as an illusionist, creative director, actor, dancer, shadow artist, sword-fighter and mime, he is able to interact with the projected animations in such a way that the boundary between the virtual and the real world is blurred - with things passing from the physical world into the digital world of the screen, and vice versa. The overall effect is a surreal experience of music, illusion, and fantastical imagery that captivates viewers.

Your town/city’s chance to select one or more of its buildings to act as a temporary screen for a magic projection. Give the locals, tourists, and media something to talk about by inspiring them to visit and enjoy the chosen site in a new way - through the magic of light and illusions. We can create any imagery style (see our gallery) and accompany it with stirring music.

We can create exclusive live shows for paying audiences, or free public ones according to your preferences. 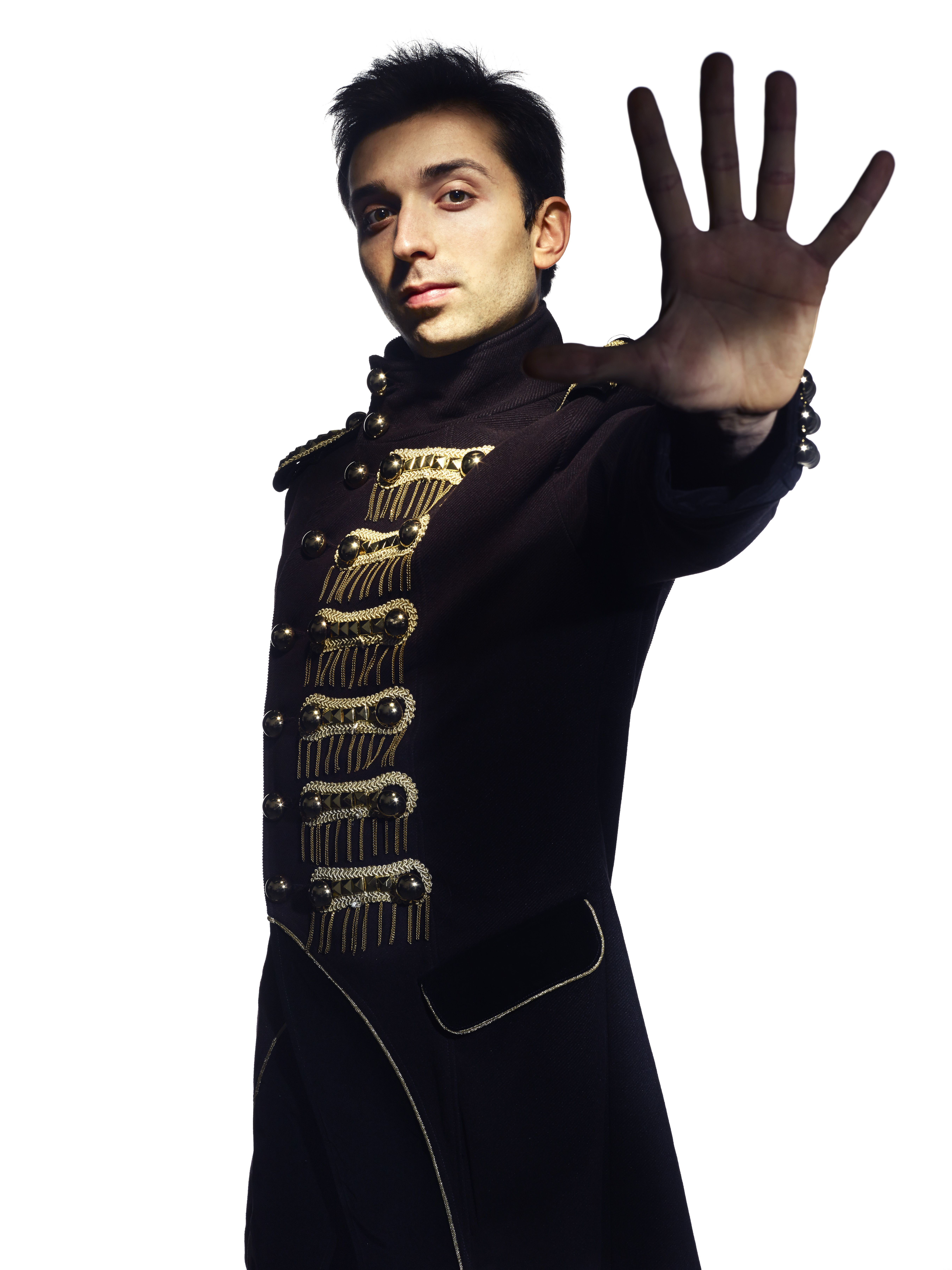 Alexis is a multi-faceted performer who combines his various skills to build surreal spectacles and stories that move and perplex the viewer.
Early life and background
Alexis was born into an italian family with a strongly artistic and theatrical background. He began his on-stage career at the age of 5, acting for two years alongside the respected Italian actor, Tato Russo in Shakespeare’s ‘The Comedy of errors’. Also at just 5, Alexis first exhibited his magical skills in an improvised section of a theatrical show. Then, a year later he started to study dance, which would later become a key component within his stage shows.
A versatile artist
At 27, Alexis already has over 20 years of stage experience and is trained in all magical genres - from big stage illusions to close-up street magic. This makes him a highly flexible, and fearless performer.
Guinness World Record breaker
During his magical variety show in 2009, ‘Night of Houdini’, Alexis broke 2 of Houdini’s records: fastest escape from a straitjacket, and fastest escape from a pair of handcuffs. Then in 2014, Alexis broke the record for the Largest Card Illusion Reveal, during his light projection show in Cambridge. Creative direction and special effects work Alexis worked as the creative director for the sell-out Italian musical ‘Aladin,’ which incorporated the music of Pooh - one of Italy’s most popular bands. During this time his duties included developing special effects for the show, including a flying carpet that can hold 2 people. Alexis also worked on Cartoon Network’s Ben 10 The Musical. For this, Alexis was in charge of making this well-known, other-worldly cartoon an on stage reality, and bringing the personalities of the individual alien characters to life in front of a live audience. Drawing on his magical and pyrotechnic skills, he created flame-shooting aliens, disappearance illusions, flying aliens, and quick-change stunts. In addition to such productions, Alexis has also developed special on-stage effects as the creative director for the world tour of respected Italian singer, Gigi D’Alessio.
Other achievements
Alexis is studying an Economics PhD in Cambridge, and researches the connection between illusion and the economy
ROSS ASHTON 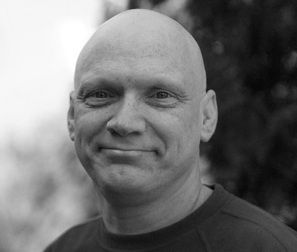 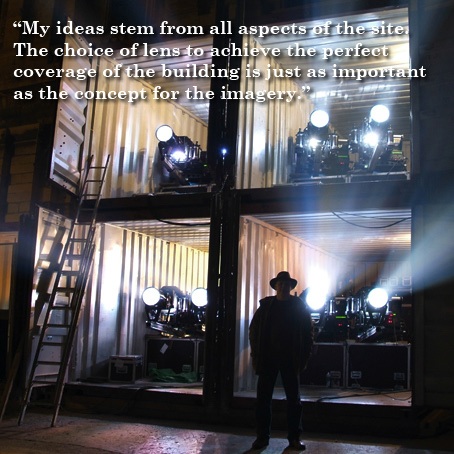 Ross Ashton was born in Sheffield in 1961. Having trained in photography and theatre he moved to London and began to work in video and slide projection. After spending four years in Paris working with a variety of visual media, he began specialising in High Power Projection in 1992.
His years of experience have produced an instinctive understanding of the relationship between artwork and structure, light and surface, object and subject. The size and scale of his work has led to his being commissioned for both stand-alone works and broader based large shows designed and created for national and international audiences.
His specially commissioned ‘son et lumière’ have received world-wide attention.
His reputation for large scale spectacular pieces mean that he has created projections as commemorations for governments around the world.
TEAM
Niccolo' Petitto
MANAGEMENT 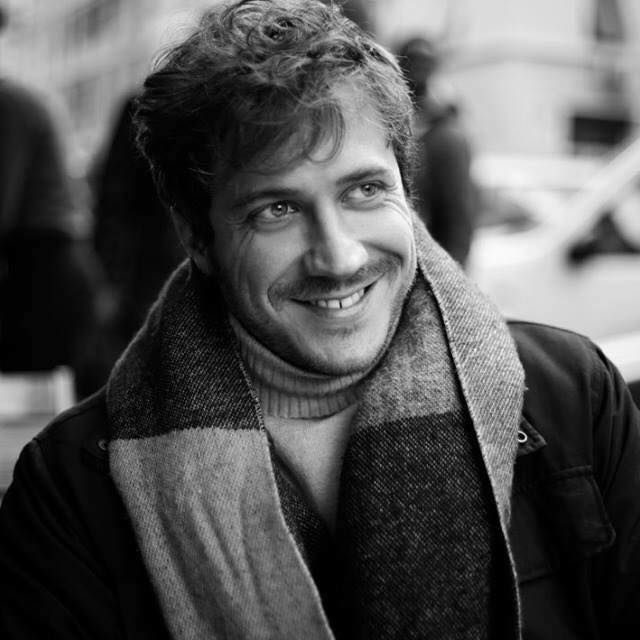 Niccoló was born in Rome and as a boy he has a clear understanding of his future: to undertake the work of Producer. He did it through artistic experiences with the role of actor for theater, television advertising and fiction, and then began his career as a producer with small charity shows in the capital. His first production was MACBETH MUSICAL TRAGEDY at the age of 25 at the Sistina Theatre in Rome, and in the same year collaborates with ROMA CAPITALE for the organization of the Short Film Festival that will be hosted by the INTERNATIONAL FILM FESTIVAL OF ROME. In 2013 she has the idea of ​​creating and then making ITALIAN MUSICAL AWARDS, the most prestigious Italian award that consecrates the best musicians and the best musical actors among the biggest Italian productions. The various editions that followed have seen presenters like Giampiero Ingrassia, Maria Laura Baccarini, Serena Rossi to finish with the extraordinary MICHELLE HUNZICKER. The 2016 edition was aired from the CANAL TV network for Mediaset. Exceptional Jury President: CHRISTIAN DE SICA. Of the latter Niccolò has been a producer and manager for about a year, and with him he has already made the show: "CHRISTIAN RACCONTA CHRISTIAN DE SICA" and the musical CD "WHITE CHRISTIAN" coming out next November. The great concert "CHRISTIAN IN CONCERTO" is in preparation. Niccoló is currently expanding his already diverse experience in organization and production by approaching management, thus involving several important young artists including our Magic Projection and Magic Festival project.
Antonia Symeonidou
PROJECT DEVELOPER
antonia@magicprojection.com 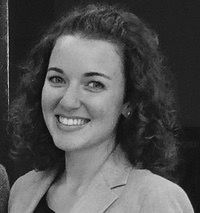 Antonia is an engineer with a passion for the arts. Her enthusiasm and problem solving mind assures the successful delivery of the project from inception to completion. Being an engineer and research associate, she possesses solid analytical thinking and goal-oriented action planning. Having worked in interdisciplinary projects in the UK (Cambridge University), the USA (WPI, Massachusetts) and Greece (NTUA & UOA), she is driving results through innovation in complex environments. In addition to this, her work as initiative launcher (thefaunvalley.com) and events coordinator (pallakoniki.org) has further refined her creative collaboration skills.

Toby Churchill is a British entrepreneur and fellow of The Royal Society of Arts. Having studied engineering, he designed the first Lightwriter – a device that enables those who cannot speak to communicate. He then went on to set up the multi award-winning Toby Churchill Limited in 1973 and win a number of awards including a British Design Award in 1969, a Department of Trade and Industry Export Award in 1996, and the Queen’s Award for Export in 1995 and 1996. Toby has also set up many further businesses, and has been awarded an honorary degree from The University of Bath for his achievements. 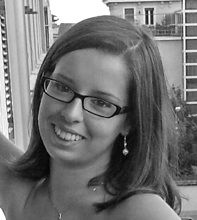 Anna has a degree in Languages and Communication, along with experience as an events coordinator and social media marketing expert. As someone passionate about both the arts and science, she excels at combining organisation, precision, and strategy, with creativity. Her positivity and drive to promote original concepts enables her to create a friendly and productive working environment that motivates and encourages the whole team to create a productive synergy of ideas that paves the way for innovation and success. 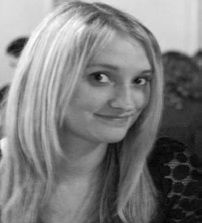 Heather has a first class degree in Communication and a further background in Art and Design. She has an eclectic skill set that enables her to work not only as a spokesperson for the project, but as a creative that works with the marketing team to produce material that communicates the visions and aims of the project.

Chiara Guida has a degree in foreign languages, and has always been deeply passionate about the world of theatre. Having successfully completed a scenography course, she then secured the role of theatrical producer’s assistant. This position proved to be an invaluable learning experience and qualified her to join Alexis Arts’ team, where she has worked in the marketing department for several years. She is dedicated to maximising resources for the team and our clients.

Luminate Cambridge Festival connects ambitious art with imaginative technology to shed light on low carbon innovation. See the city in a brand new light from the 12th to the 23rd February 2014.

The association, based in Rome, was born during a particular historical moment characterised by significantly out-migration flows to assist and protect emigrants and their families’ rights, to support Italian communities around the world and to help them keeping contacts with their hometown. In Italy the organisation has 60 locations and 48 international ones based in 16 different countries.

Further to several changes in the migration flows in the last few years, ANFE is facing this problem organising cultural-linguistics courses addressed to emigrants’ children and promoting various initiatives to support social inclusion of migrant citizens.

This associations is part of the Register of the Associations which carry out activities to help immigrants in finding a job and to fight against discriminations. Finally ANFE is also the founder of some others national and international associations as Consulta Nazionale dell’Emigrazione (CNE), del Consiglio Generale dell’Union International des Organismes Familiaux, dei Comites e del Consiglio Generale degli Italiani all’Estero (CGIE). It takes actively part as well in most of institutions related to immigration, international economical cooperation and development problems.

ANFE’s objectives are the maintenance and the improvement of the "sense of belonging" to the community of Italians abroad, traditions and customs’ enhancement, Italian Style and Heritage strengthening to facilitate cultural, trade and production movements and to expand the Italian culture to generations that know little or nothing about it.

For this reason, ANFE has carried out and supported several projects about the diffusion of the Italian culture abroad and the promotion of the integration between all migrants’ communities 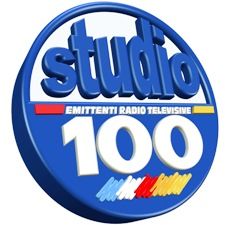 From 1978 TV channel leader in Taranto, Brindisi and Lecce but present as well in Matera and Cosenza.
Since May 2012, further to the digital TV launch, Studio 100 TV is now present on channel 15 throughout Puglia and on channel 187 many italy areas.
Its strengthen points are punctuality and capillarity of daily news service. A full schedule made of 18 daily news spots and weekly programs about the latest facts, politics, health and social environment. Moreover this is possible thanks to the collaboration with his powerful Editorial teams.
Finally all these programs can be watched in streaming on your iPad, iPhone and Androi.